One of the most important architects of Catalan Modernism 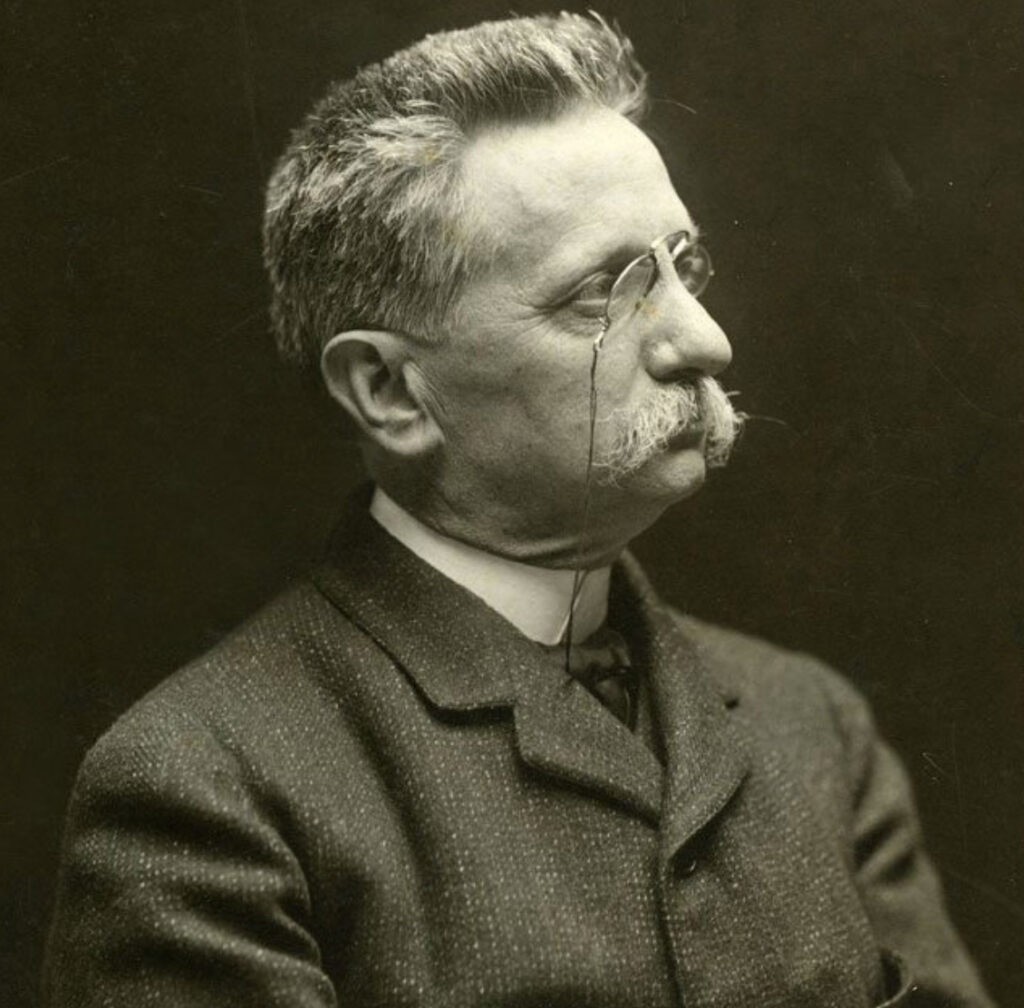 Lluís Domènech i Montaner (Barcelona, 1849-1923) was one of the most important architects of Catalan Modernism. With a degree in architecture in 1873, he is the author of such imposing buildings as the Palau de la Música and the Hospital Sant Pau in Barcelona. As a young man he travelled around Europe, from where he imported technical knowledge and new materials that gave him a new vision of architecture.

This new technique coincided with the emergence of the new Catalan bourgeoisie, which immediately admired the work of the architect. It is not surprising, then, that he is one of the most prolific architects of the time and that some of his works have been recognised as World Heritage by UNESCO. As a teacher, he trained such outstanding disciples of Catalan modernism as Antoni Gaudí, Josep Puig i Cadafalch and Josep Maria Jujol.

Montaner also excelled as a typeface designer, illustrator and bookbinder. Particularly important was his political side, committed to political Catalanism, he was the driving force behind the Regionalist League and a member of the Spanish courts. He combined his profession with studies in heraldry and Romanesque art.

The work. The Casa Navàs

Casa Navàs marked a clear evolution of Montaner’s architectural language. From the very beginning he gathered a team of collaborators of great level and let them work with complete freedom, a gesture very unusual at the time. Particularly close was his relationship with the decorator Gaspar Homar, they complemented each other so well that in the interior design works of the house it is often difficult to see where the work of one begins and where that of the other ends. However, the most architectural part almost always corresponds to Montaner, and the lights, carpentry, furniture and embroidery to Gaspar Homar.

This is not the only outstanding work in the city of Reus by the famous architect. Montaner also designed the Pere Mata Psychiatric Institute, Casa Rull and Casa Gasull, which today can also be visited on the Modernism Route promoted by the Agencia Reus Promoció. 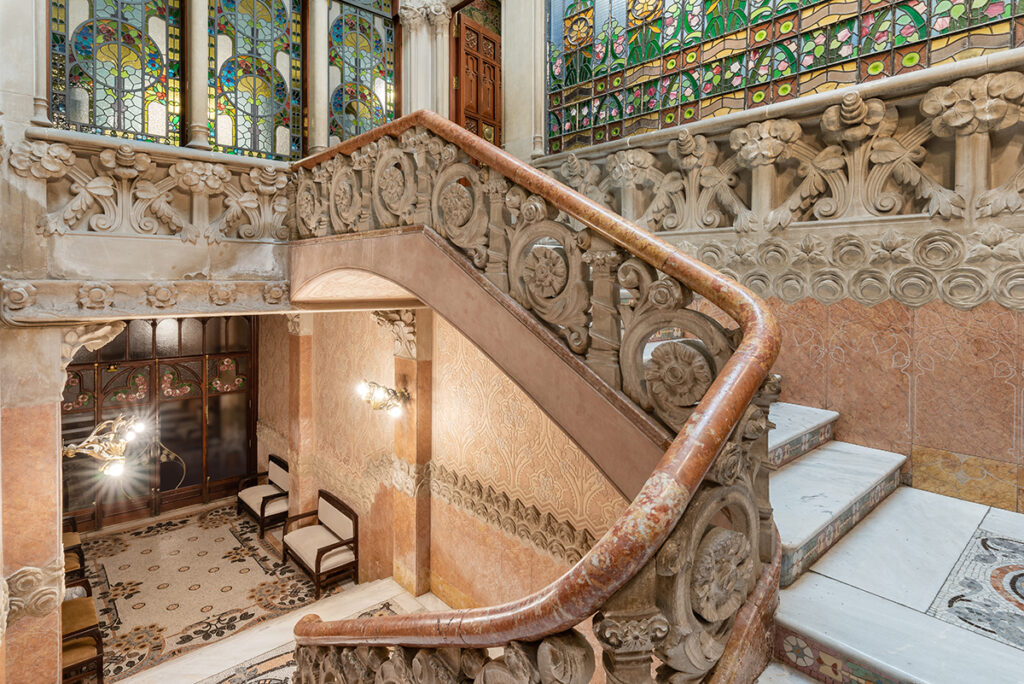 His life, stage by stage

Lluís Domènech i Montaner was born in Barcelona on December 21, 1850. Son of Pere Domènech i Saló, a publisher and prestigious bookbinder, and Maria Montaner Vila, from a wealthy family of Canet de Mar.

He graduated from physics-mathematics sciences, followed his training by completing a degree in architecture in Barcelona and later at the school of architecture of the Royal Academy of Fine Arts of San Fernando in Madrid. Once he finished his studies he travelled all over Europe in order to continue to train and know the new architectural trends. It is then when he is impressed by the traditional German architecture.

As soon as the school of architecture of Barcelona opened he entered as a professor along with José Vilaseca Casanovas and worked as director of the educational centre until 1920. This position enabled him to establish the guidelines of Catalan modernism and to be the master of great architects of that time such as Antoni Gaudí.

Also in 1875, he married María Roura Carnestoltes, daughter of a wealthy family of navigators from Canet de Mar, with whom he had eight children. The family lived in Barcelona but continued to vacation at Canet de Mart, their hometown.

In is the year in which the Universal Exhibition of Barcelona was held, an event that professionally consolidates Domènech i Montaner, as he received several commissions from Elies Rogent, director of the School of Architecture and the works of the exhibition. The Castle of the Three Dragons and the Hotel Internacional are some of his works from this period where he incorporated applied arts and ornamental solutions that will become common in his architecture. In that same year he joined the League of Catalonia, a political party of which he became president.

He founded Unió Catalanista and the following year he was appointed president of the political party together with Enric Prat de la Riba as secretary. In 1901 the party merged with the Regionalist Union and the Regionalist League was formed, formed mainly by the Catalan bourgeoisie that defended a free, strong and autonomous Catalonia.

In the years of change of century, he was dedicated to design private homes. One of the most outstanding works of the time is Casa Navàs in Reus, which has a unique communicative discourse. The Casa Lleó Morera in Barcelona or the Solà Morales in Olot are other examples of this period and in them you can see a comprehensive view of modernism where the arts are applied in sculpture, mosaic and stained glass. These projects involve artists such as Gaspar Homar or Lluís Bru, habitual collaborators of the architect.

It is a period of architectural completeness for the architect. In 1905 the construction works for the new hospital complex began, and he continued and improved the avant-garde concepts applied to the psychiatric hospital Pere Mata. In 1911 the first part of the construction was inaugurated and from 1914 Domènech’s son was in charge of finishing the construction.

In 1905 the construction of the auditorium commissioned by the Orfeó Català began and was considered the greatest expression of Catalan modernism. The Palau de la Música, together with the Hospital Sant Pau, were awarded the Annual Concert of Artistic Buildings of the City Council of Barcelona in 1905 and 1913 respectively, and in 1997 the UNESCO catalogued them as a World Heritage Site.

In the last years of his life Domènech i Montaner is distanced from the great architectural projects to dedicate himself to archaeological and historical investigation. The manuscripts on the history of Catalonia and Catalan heraldry, written in the Masía Rocosa of Canet de Mar, where he spends most of the end of his life, are noteworthy as he is affected by a stomach cancer that makes him delegate all his professional activity to his son Pere Domènech Roura. He died in Barcelona at the age of 73 and was buried in the cemetery of Sant Gervasi in Barcelona although his last wish was to be buried the family pantheon in Canet de Mar.