Works start on the reconstruction of the Casa Navàs gable 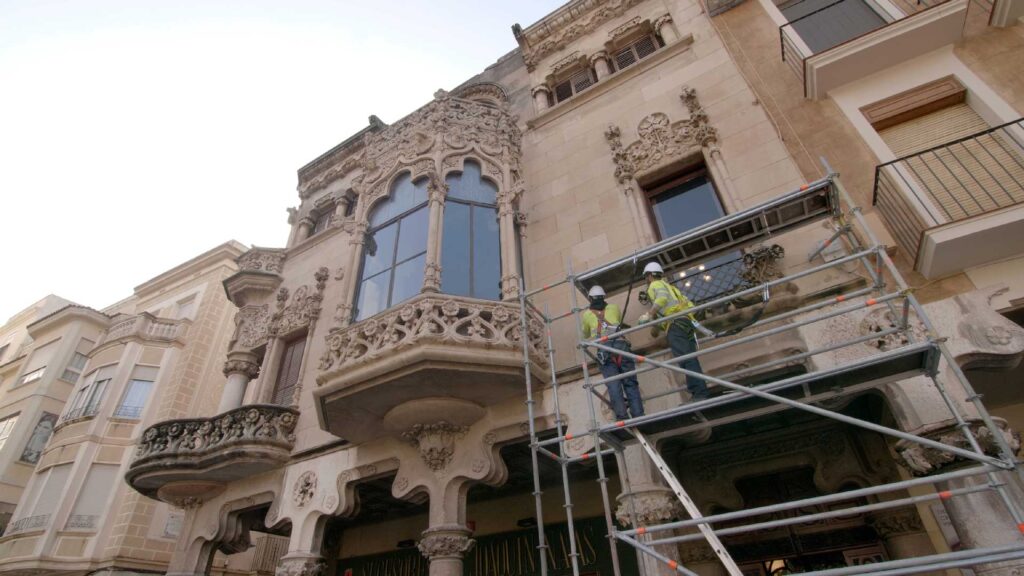 The gable will be made with natural stone from Vinaixa

The works are forecast to be finished before Easter Week

The reconstruction works of the Casa Navàs gable have already started. Setting up the scaffolding has begun today and work on the roof will begin next week. Finally, the Catalan Government has accepted the use of natural stone instead of artificial, for the gable panels.

This week, the Catalan Government’s Territorial Commission for Cultural Heritage in Tarragona has approved the reconstruction works on the gable with natural stone. This has been done after the owners requested an initial project modification, which considered artificial stone. In order to prevent the creation of a “historical wronging”, and so that the reconstructed part could not be confused with the original, the stone will be worked in a different way. There are several options on the drawing board: work on the surface texture of the new elements, leaving them smooth, without tool marks (chisel, cutters, etc.); sculpt the decorative vegetation shapes reducing their volume; or work them using geometric plans, leaving out the organic shapes shown on the original elements. The most feasible option will be decided upon over the coming days.

In any case, all works carried out on the reconstruction of the gable will be perfectly documented in writing, in graphics and in photographs. The aim is that future generations will always have the necessary information to know that the Casa Navàs gable is not the original from 1904 but rather works carried out in 2020.

The intention of the Casa Navàs owners is, just as Lluís Domènech i Montaner did at the beginning of the XX century, to use stone from Vinaixa (Lleida). This is sandstone that it is easy to mould. The stonecutters, with their workshop in Solsona, will begin to make the replicas of the pieces next week. This is the most complex part of the gable reconstruction.

This Thursday morning, the operators have started to set up the scaffolding, a task that has had to be postponed for a few days because of the extremely bad weather. If there are no more hitches, it will be finished on Monday. Early Tuesday morning, the architects in charge of the project, restorers, stonecutters, site managers and representatives of Casa Navàs will make the first visit to the worksite and, from thereon in, work on the roof will begin to prepare it for the arrival of the stones that will crown the gable. The works are forecast to last for two and a half months and that, before Easter Week, all the works will have been completed.

A canvas with a modernist design has also been made and this will cover all the scaffolding in order to reduce the visual impact of the works. The canvas will be put in place half way through next week.

It should be remembered that the original gable, tower, roof and the upper part of the façade were destroyed during the Spanish Civil War. One of the many bombings that the city of Reus suffered during those years, the one on the 26th of March 1938, seriously affected Casa Navàs, destroying its appearance. Now, eighty years later, the owners want to give this emblem of European modernism its original image back.