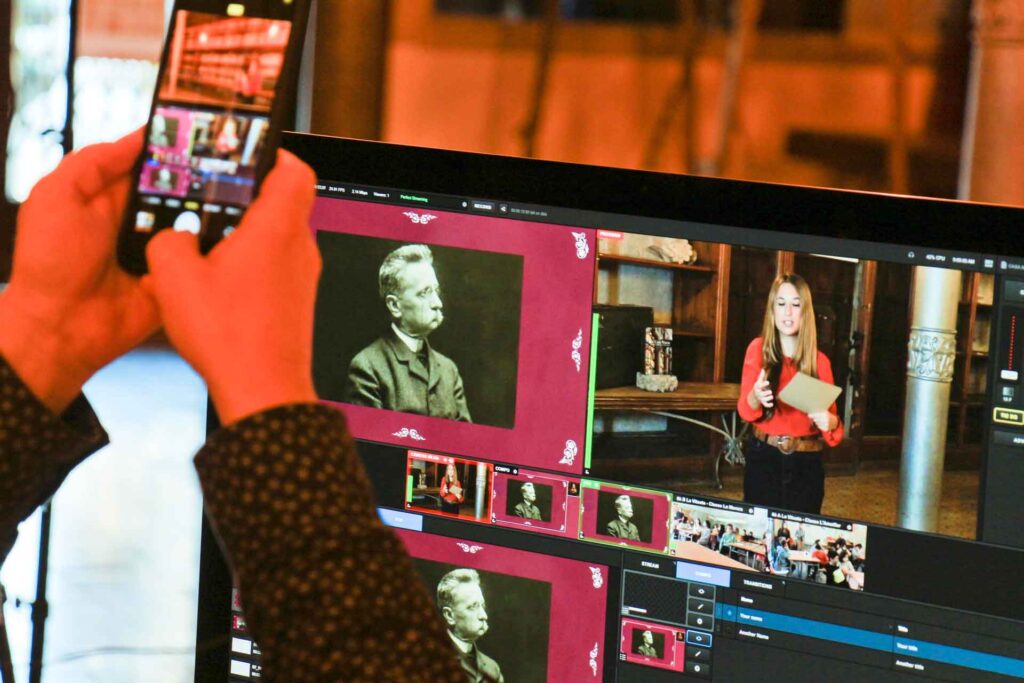 The sixth-grade students from La Vitxeta school were the first to have the experience.
The idea is not only to make virtual tours on streaming for the students but also other groups.

Casa Navàs has made this morning its first virtual tour. The pilot test was carried out with students from La Vitxeta school in Reus and it is intended to be continuous. Beyond schoolchildren, this streaming service will bring this modernist jewel closer to all kinds of groups. It will also allow Casa Navàs to cross borders and be present on an international scale. The project is the result of a collaboration agreement between Casa Navàs and Reunim.cat, a streaming provider platform from Reus.

Around 50 students from La Vitxeta school in Reus visited several rooms of Casa Navàs this morning. Although it may be considered as irrelevant, this fact has the particularity of having taken place without the need of leaving the school for the students, as it has been broadcasted via streaming. The students from two sixth-grade classes have watched through their classrooms projectors how Casa Navàs’ director live explained this emblem house built in 1908 by architect Lluís Domènech i Montaner just for them.

Apart from her explanations on the characteristics and many details on the house, the students had the chance to talk to the director who has solved all their doubts and curiosities. The initiative has been very popular among the children, who have actively participated during the virtual tour. The teachers have also valued very positively the project, especially at a time when they cannot go on excursions normally, as this visit has allowed them to offer the students a different experience and provide them with some time to relax as part of their usual educational programme.

This is a pilot test that Casa Navàs starts during the pandemic, due to the difficulty of developing cultural activities. At the moment, due to COVID-19, the premises are closed to the public. Beyond the current situation derived from the coronavirus, Casa Navàs wants to take this experience as a positive opportunity to offer this resource to other groups. Precisely, one of the next pilot tests will be with a group of people with reduced mobility, as the strict legal regulations on the conservation of the house do not allow the Art Nouveau building to be adapted to make it accessible to everyone. When the initiative is consolidated, work will also be done to make presentations in different parts of Spain and others around the world in different languages.

This project is the result of a collaboration agreement between Casa Navàs and Reunim.cat, a recently created streaming provider platform that broadcasts live events online. The platform has been promoted by the businessmen Ramon Masip, from the video production company MABS, and Miquel Saperas, online marketing consultant, both from Reus.

Currently, the streaming sector is experiencing a moment of growth due to the confinement and the limitations to develop massive face-to-face events. Apart from guided visits to museums or singular buildings, Reunim.cat offers its services to many other sectors such as those of the world of culture, show business and entertainment (to broadcast concerts, plays or other events online), foundations or training companies (to hold online seminars), political parties (to broadcast rallies and pre-election events), sports entities (to broadcast parties or races), NGOs and non-profit entities, and a long list of others.