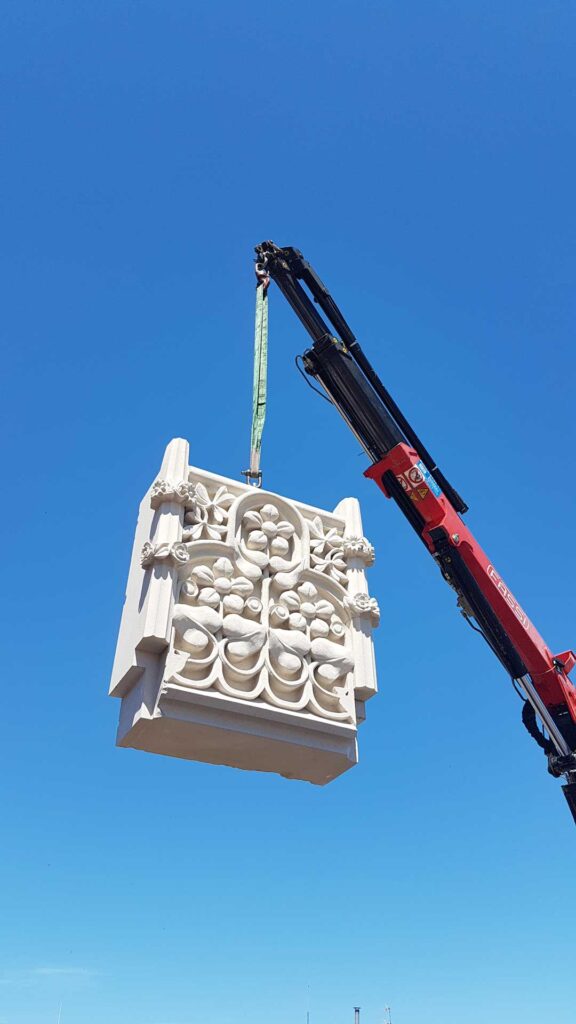 The first decorative gable stones have been installed at Casa Navàs today. This is a very delicate task as each piece weighs one tonne and that is why a 32-tonne crane with a 32-meter reach has been required, along with the excellent professionalism of all those involved. Five decorative stones in total will be put into place, and also a central panel where there is a circular medallion on which the date 1904 can be seen. The decorative motifs have been completely made manually and the stone used is from Vinaixa, the same one chosen by Lluís Domènech i Montaner at the beginning of the XX century. Just like the original, the total size of the gable will be 3,9 meters high by 4,8 meters wide. All the stones will be in place by this Wednesday and the entire works will be finished during the month of June.

After many months of prior work, at the end of the April direct work was started at Casa Navàs to get everything ready for the arrival of the gable. Once the roof geometry was varied, the first decorative stones of the frontispiece were installed. When all the pieces are in place, a three-dimensional steel structure will be installed behind the new gable to reinforce it.  From this point, the pinnacles can be placed, re-join the stones and the finishing touches, if required. Once the works are finished, a chromatic patina will be applied to the entire surface area. This will give homogeneity to the whole façade and, at the same time, it will protect it. Meanwhile, the upper part of the façade will also be cleaned.

All the gable’s decorative work, which has taken nearly four months, has been done manually by the stonecutters from the company Pedra Maties from Solsona. The people in charge of carrying out the works are the professionals from the restoration company Récop Restauracions, under the supervision of the technicians in charge of the project, the architects Pau Jansà and Joan Tous and the conservator-restorer, Pau Arroyo.

The gable is made up of five rectangular panels placed gradually on 3 levels separated by pinnacles, making a triangle over the gallery axis. From the conserved fragments, the panel features can be defined, sculpted with vegetation motifs and framed by a trilobed arch. The axis of each piece makes a branch with leaves that reach the base, twisting to define the two secondary axes. There is a 5-petal flower under each arch with a perforated sphere in the centre. The branches spiral along the sides of the flowers, two leaves re-routing the organic line of the main axis towards the meeting point between the geometric arch. The space between the central arch and the lateral one is filled with two flowers. All the ornamental pieces of the gable have the same design. There are also six pinnacles supported on columns and a central smooth panel where the medallion is and, just as could be seen in the original, the date 1904 is sculpted.

It should be remembered that the gable was destroyed during the Spanish Civil War because of the many bombardments that the city of Reus endured. Specifically, the attack that affected Casa Navàs took place on the 26th of March 1938. That day, at about 8.20am, six S-79 bombers with 48 one-hundred kilo bombs and 24 twenty kilo incendiary bombs severely hit the capital of the Baix Camp. The bombing left Casa Navàs without part of the façade and the roof, in addition to the tower and the gable.

Some of the pieces of the gable fell onto Mercadal Square, the family who owned the house took the stones away and stored them on the estates that they had on the outskirts of the city. They have remained there for the last eighty years. Having conserved the pieces has been fundamental for the reconstruction of the frontispieces as this has meant that the stonecutters can reproduce the motifs in an identical way to the original ones.