More than 14 thousand people have visited Casa Navàs this 2019 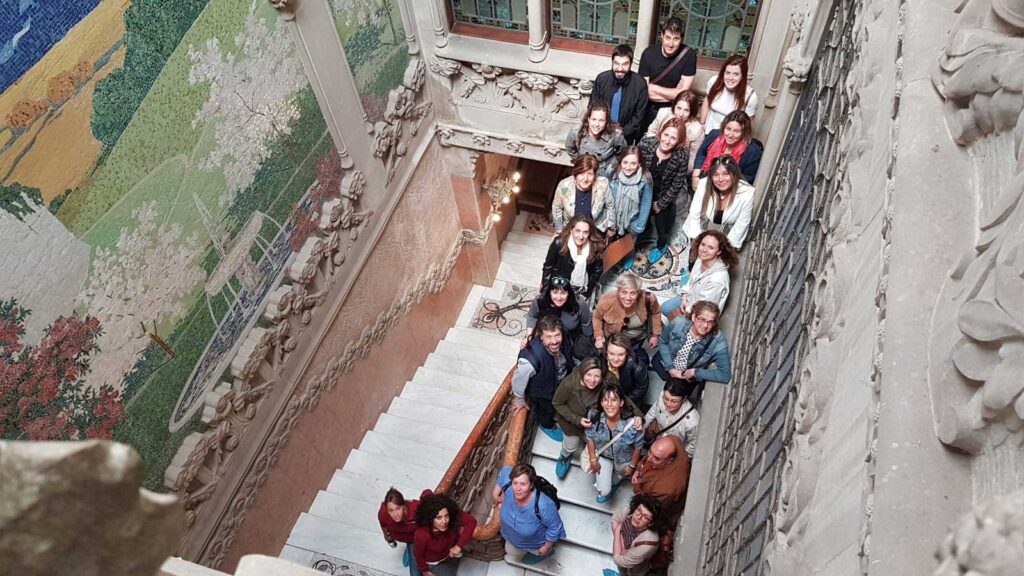 Casa Navàs in Reus closes the first semester of 2019 with an absolute record number of visitors. A total of 14,103 people visited this jewel of European modernism from January to June. The Catalan public was the majority, followed by the Spanish, the people from Reus and the international. The owner of the house is convinced that these figures will continue to grow, especially after the opening hours have been extended this summer.

The beautiful house of El Mercadal is every day more crowded, only within the first six months of this year as it has exceeded the total number of visitors in 2018 (10,350 people) and 2017 (2,177 people). This represents an increase of 712% compared to the first half last year when the house did not open so many hours.

Taking into account nationalities, with 6,529 people the majority of the public comes from Catalonia (46.5%), followed by the Spanish with 2,918 visitors (21%). The people from Reus represent 19% of visitors to Casa Navàs with 2,672 people and, finally, with 1,838 people, the international public represents 13.5%.

The owners of Casa Navàs values very positively the results obtained in 2019 and is convinced that these figures will continue to improve. All the people who visit the house are very satisfied with what they discover inside, since, prior to the visit, they are not aware of the architectural beauty hidden within the walls of the Casa Navàs. This high degree of customer satisfaction and the good figures reached during the first months of the year, are what make the owners optimistic and predict a promising future for this emblem of European heritage.

By months, the most crowded was April. Coinciding with the Easter campaign, a total of 3,261 people visited the Casa Navàs during those weeks.

The origin of the visitors

The people from Barcelona have been the most interested in visiting Casa Navàs, surpassing even those of Reus. 2,773 people have travelled from the Catalan capital to see what is one of the most emblematic works of the architect Lluís Domènech i Montaner. In fact, the profile of those who visited the house these early months of the year have mainly been people over 65 years from Barcelona. In order, they are followed by visitors from Tarragona, Lleida, Sabadell and Sant Cugat.

Apart from Catalonia and analysing the visits by autonomous communities, with 765 people the citizens of the Valencian Country are those who have visited Casa Navàs the most. The Basque Country, the Community of Madrid, Andalusia and the Balearic Islands complete the Spanish podium.

As far as the international public is concerned, with 34.6%, France continues to be the country of greatest interest for this modernist emblem. It is followed by Germany (11.22%), Russia (10.62%) and the United Kingdom (8.65%).

The profile of the visitors of Casa Navàs has changed a lot during the first six months of the year compared to the last six months of last year. If then, with the summer in between, the international audience represented 29%, it has now fallen to 13.5%. On the other hand, both the Catalan and Spanish audiences have grown. The former has gone from 36% to 46.5% and the latter from 19% to 21%.

This change in trend can be explained by the fact that during the summer months there is a lot of tourism on the Costa Dorada, while during the winter months it is the national public that, with weekend breaks, usually visits the cultural heritage of Reus. Now that it is summer again, international tourism is beginning to gain more weight to the detriment of national tourism, while in winter the trend is expected to be reversed again. During these first six months of the year the age ratio of visitors has also increased, 40% of the public were people over 65 years.

The number of people from Reus who have visited Casa Navàs during this first semester of the year has doubled compared to the last semester of 2018. Specifically, it has gone from 1,254 visitors to 2,672 in 2019, with 19% representing an increase of 3% of total visitors to the house.

Many of these people from Reus assure that they had a pending debt with their city for not having visited before this referent of the European modernism. After an hour walking through every corner of the house, they were surprised at what they found inside, as they did not imagine that the building that they see every day when they pass through El Mercadal hides such a Jewel.