The reconstructed gable now shines on the façade of Casa Navàs 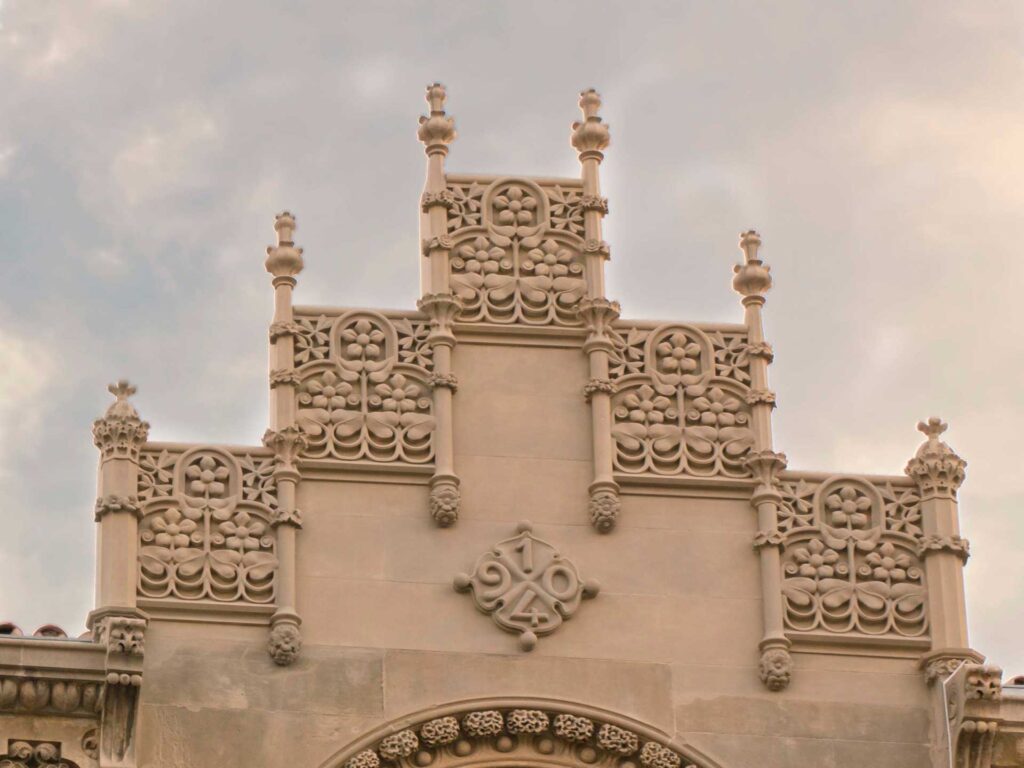 The reconstructed gable now shines on the façade of Casa Navàs

The inauguration has taken place this Thursday evening before the expectant citizens gathered in Mercadal Square.

After months of waiting, the Casa Navàs gable is now a reality. It has been inaugurated this Thursday evening under the gaze of all the Reus citizens who have come to Mercadal Square to discover the details of this reconstruction. The act, designed to be seen on-line due to the COVID-19, has also been widely followed through the Casa Navàs website and Canal Reus. The director of Casa Navàs, Sílvia Sagalà, values this historic moment given that “with the reconstruction of the gable we are very close to giving Casa Navàs back the original appearance designed by the architect Lluís Domènech i Montaner at the start of the  XX century”.

Total satisfaction among the Casa Navàs team after seeing the reconstructed gable standing out on the top of the façade. “Eighty-two years ago, the house lost the crown and returning it means, in some ways, repairing the effects that the Civil War had on Reus”, says the director of  Casa Navàs while adding that “ it is an important moment for the city of Reus but also for the country and European Modernism in general, as it recovers the genuine design created by Domènech”. Currently, Casa Navàs is the only modernist building in the whole of Europe that conserves its original interior. Now, only the tower has to be reconstructed so that the exterior is also as planned by Lluís Domènech i Montaner.

Before unveiling the gable, the documentary “Casa Navàs. Rebuilding the memory” was shown. Made by the Reus producer Acid Factory, the documentary goes through the entire reconstruction process with the agents involved in the project. Afterwards, the company Lucky Luke and Les Artistes Locals took the spectators back to the start of 1900 re-enacting characters like Domènech, the worker Manel and his girlfriend Coia. The architect has been in charge of the countdown to inaugurating the gable. Sagalà wishes to thank the professionalism of everybody involved in the inauguration, such as the producer Acid Factory, the company Lucky Luke and Les Artistes Locals, to video-production Mabs, Proditsa, the hairdressers’ and the make-up artists, Josep Maria Casas from Barato and the staff at the house, “thanks to their involvement, the inauguration has been a great success”. The director of Casa Navàs also wants to show appreciation for all the work carried out by the technical team that worked on the reconstruction of the gable. The work of the architects, Joan Tous and Pau Jansa, the conservator-restorer, Pau Arroyo, the stonecutters from the company Pedra Maties and all the team from the Rècop company has been outstanding.

The reopening of Casa Navàs

Casa Navàs had to close its doors to the public on the 13th of March due to the coronavirus pandemic. After four months, this Saturday the 11th of July, the guided visits will begin again. In order to provide the visitor with the utmost safety, all the health safety measures have been put in place. The visits will be staggered and the maximum number in the groups will be 13, and it will be compulsory to use masks, booties, disinfect hands and temperatures will be taken before entering. Moreover, the house will be constantly disinfected to prevent risk of infection.

The visits will take place from Monday to Friday from 10am to 2.30pm and from 4pm to 9pm. They will last for an hour and will start every half hour. Moreover, on Tuesdays and Thursdays in the evening, visitors will be offered the Premium Visit with guided visits that finish with wine tasting sessions of “Secrets de Casa Navàs” from the Clos Galena winery and vermouths from Vermuts Miró. And all with snacks and background music.