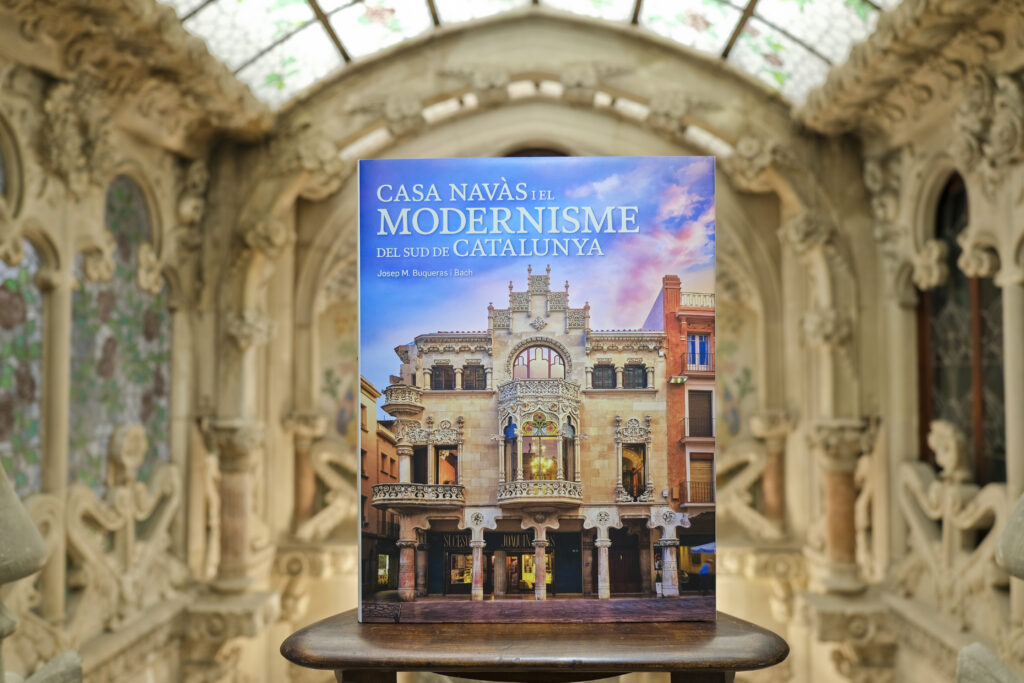 Casa Navàs presents the book Casa Navàs i el Modernisme del sud de Catalunya, an ambitious inventory with almost 700 references to the modernist architecture of the Camp de Tarragona and Terres de l’Ebre from the late 19th and early 20th centuries. The work is structured by counties and shows the buildings of a hundred municipalities with an excellent and unpublished photographic work. The aim of this book is to highlight all the modernist heritage of the counties of southern Catalonia.

Casa Navàs is preparing for a very special Sant Jordi with the presentation of the book Casa Navàs i el Modernisme del sud de Catalunya. It is an ambitious and relevant inventory of the modernist architecture of the Camp de Tarragona and Terres de l’Ebre. It follows the work published last year (Casa Navàs I el Modernisme a tota la província) and which also has Modernism as its central theme.

The new publication improves and expands the content of its predecessor and is presented in a large-format, deluxe edition, which stands out for its historical rigour, its design, and the spectacular photographic section. In this case, the edition has counted on the participation of a group of photographers from the district, who have been in charge of immortalizing the buildings with an excellent visual result. The treatment and selection of the images of the Casa Navàs offer an unprecedented and surprising view of all the beauty hidden inside, a real treat for the eye.

The book also has detailed infographics that reproduce different maps of the district to facilitate the journey through the corners where all the buildings are located. They highlight the modernist heritage of the district, on a par with Barcelona and the main European cities.

Once again, the technical architect Josep Maria Buqueras has been in charge of coordinating this majestic work that has its origin in the owner of the Casa Navàs, Xavier Martínez i Serra. It is published by SETIER and distributed by Triangle Books. On this occasion, it is also launched in a Catalan-English and Spanish-French double edition.

Casa Navàs i el Modernisme del sud de Catalunya thus becomes the definitive guide to discover the modernist buildings of the Tarragona area in the late 19th and early 20th centuries. In total, there are more than 500 pages and almost 700 references to buildings and works spread over a hundred municipalities and with names as important as those of Antoni Gaudí, Lluís Domènech i Montaner, Josep Maria Jujol, Pere Caselles, Cèsar Martinell, Joan Rubió and Ramon Salas. In addition, each of the buildings comes with the name of the architect responsible, the year it was completed, an artistic and architectural description and, in some cases, its history and that of the craftsmen who worked there. This extensive information provides an insight into the architecture, culture, and customs of the society of the time.

The book is structured by region, and the first part is devoted entirely to the Casa Navàs, the modernist jewel of the Plaça del Mercadal in Reus. The work of Lluís Domènech i Montaner (who also designed the Institut Pere Mata in Reus), it is a key piece of Catalan Modernism and the only building in Europe that still preserves its original interior. The chapter explains its history and shows all its beauty through a spectacular photographic selection to discover its floral motifs, the stained-glass windows, the colourful mosaics, and the restored frontispiece.

With the same historical and architectural rigour, the book goes on to describe all the works found in Baix Camp, Alt Camp, Baix Ebre, Baix Penedès, Conca de Barberà, Montsià, Priorat, Ribera d’Ebre, Tarragonès, and Terra Alta. The works selected are mostly from the Modernist period, although, due to the difficulty of delimiting the classification, some eclectic and nineteenth-century works have also been included. In short, Casa Navàs i el Modernisme del sud de Catalunya is a delight for historians, architects, bibliophiles, collectors and, above all, for lovers of art and Modernism.

The book will be presented publicly at a double event at Casa Navàs in Reus and at the Col-legi d’Arquitectes de Catalunya (COAC) in Tarragona on 12 and 13 April respectively.

Design, layout, and coordination of the edition: Elisabeth Tort Fresquet