Casa Navàs will recover its gable in 2020 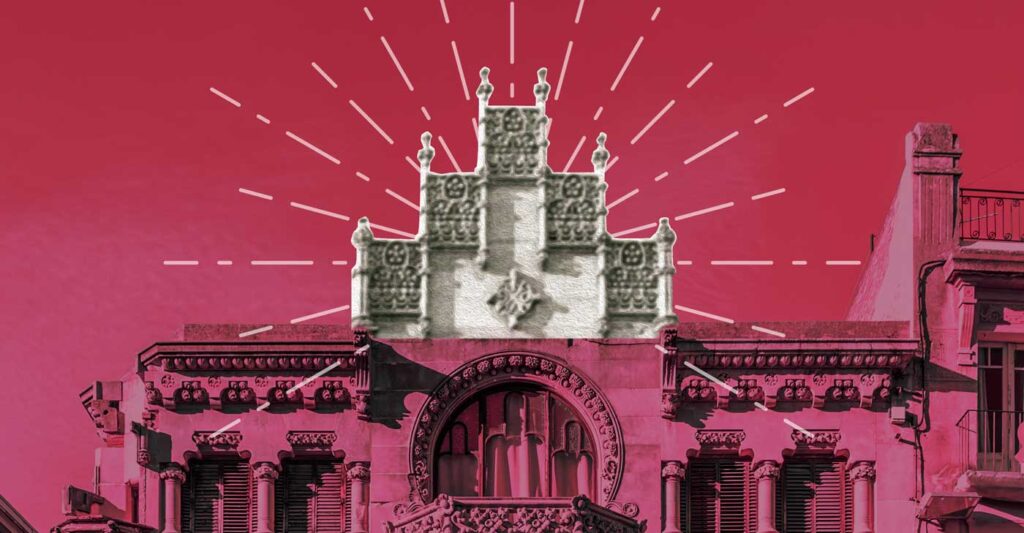 The reconstructions tasks will end before Easter

Setting up of the “Be a witness, experience the change” campaign in order to immortalise the façade’s current appearance

The Spanish Civil War changed the physiognomy of Casa Navàs forever. Now, eighty years later, the current owners of the house have decided to give it back its original appearance. The restoration will be carried out gradually and the first step is to reconstruct the gable, which will be finished at Easter. In order to immortalise the current image of the house, they have set up the “Be a witness, experience the change” campaigns, a painting and photography contest in which the winners will be awarded up to 600 €.

Reus was one of the most punished Catalan cities during the Spanish Civil War. The bombing of the city was constant and in the early morning of the 26th of March 1938 a bomb destroyed the roof on the second floor, the tower and the gable. A few years later, the owners at that time  –Joaquim Blasco and Maria Font de Rubinat- had the roof and the walls on the second floor reconstructed, but they couldn’t recover the tower or the gable.

Eighty years after the destruction, the current owners of Casa Navàs have decided to restore the effects that the War had on one of the most emblematic works designed by the architect Lluís Domènech i Montaner. Recovering the original aspect will be gradual and the first thing that will be done is to rebuild the gable. The works will begin in January and will be finished at Easter.

Description of the original gable

The gable was made up of 5 rectangular panels placed gradually on 3 levels separated by pinnacles, making a triangle over the gallery axis. From the conserved fragments, the panel features can be defined, sculpted with vegetation motifs and framed by a trilobed arch. The axis of each piece made a branch with leaves that reached the base, twisting to define the two secondary axes. There was a 5-petal flower under each arch with a perforated sphere in the centre. The branches spiralled along the sides of the flowers, two leaves re-routing the organic line of the main axis towards the meeting point between the geometric arch. The space between the central arch and the lateral one was filled with two flowers. All the ornamental pieces of the gable had the same design.

Very partial parts of the pinnacle remain, which makes it necessary to create models inspired on similar elements from other parts of the building. In the centre of the gable’s smooth panel wall, there was a circular medallion with ornaments and the date 1904 could be seen. This medallion will also be recovered in the reforms.

The gable’s stability was provided by its size –its surface area was 8.60 m2, it was 4 metres high and 4.74 m wide- and also because of the geometry of the roof, made up of gabled ends behind it. When reconstructing the roof, after the bombing, haste eliminated the chance to redo the gable and the roofed part that supported it.

With the aim of corroborating what the original gable was and to recreate the design in plans, the architects Pau Jansà Olivé and Joan Tous Gomà-Camps and conservator-restorer Pau Arroyo Casals have designed an architectural project. In order to do so, historical research has been carried out along with drawing on information from archive photographs and plans. The project was approved by the Catalan Government’s Heritage Commission of Tarragona las July. The works will be carried out by the Reus restoration company Rècop which, with over 25 years of experience, has been in charge of many important restorations throughout the country, like the Casa Batlló façade restoration and the pavilion of Sant Manel within the historic site of the Hospital de la Santa Creu i Sant Pau in Barcelona.

The first step in the reconstruction has been to gather the original stones that, from eighty years ago, have been dispersed over different estates owned by the Font de Rubinat family. When the bomb destroyed part of Casa Navàs, the pieces were stored in a house in the prison street and, little by little, they moved them by carriage to the estates that the family had on the outskirts of the city. The stones were sedimentary, brought from Vinaixa (Lleida), and, in order to respect the same characteristics, the reconstruction will also use natural stone from Vinaixa.

The restorers and the stonecutters who are in charge of the works, are taking the final decisions about what is the best method to make the replicas of the pieces. Although it was first thought the best way was to make a mould, now they are opting for specialised stonecutters who can reproduce the pieces with natural stone using pieces recovered from the panels with stone as models. To make the decorated pieces for the frontispiece, three months of uninterrupted work was required, while Rècop will continue working on the façade of the house to prepare for the arrival of the gable. The scaffolding to start the works will be set up at the beginning of the second fortnight of January.

Once the scaffold is in place, the geometry of the roof will have to be changed to stabilise the gable and give it back its original appearance. After demolishing the part of the existing roof affected by the intervention, a three-dimensional structure will be built of steel profiles supported by plates over the existing pillars and a triangle attached to the rear of the new gable. The structure will reproduce the corner of the new stretch of roof. Using the plans for the three-dimensional steel structure, the new roof will be made with a ceramic dovetail, thermal insulation and finished with original reused tile.

The centre of the gable is made up of smooth stones, these will be placed first and they will be joined with fibreglass rods. The contour of the gable has decorative pieces and these will be the last to be put in place. Once the works have been finished, a chrome patina will be applied (lime water with inorganic pigments) to the entire surface area, the same technique used in modernist times. This will give the entire façade homogeneity and will also protect it. At the same time, the upper part of the façade will be cleaned.

“Be a witness, experience the change” campaign

Despite the fact that the current aspect of Casa Navàs is not the original one, it is true that for most Reus people today’s image is the one that they associate this emblematic modernist building with, because they have always seen this way. In one month’s time, the reconstruction work on the gable will begin and this will change the physiognomy of this Domènech i Montaner work forever. Therefore, Casa Navàs invites all the citizens to immortalise its aspect through the “Be a witness, experience the change” campaign. A fast-painting contest will be organised and also a photography contest for the social networks.